The Kangerlussuaq-Sisimiut caribou population inhabits approximately 26,000 ice-free km2 region about the Arctic Circle (67N) in West Greenland, which is made up of mountains, open rough upland or alpine tundra. Most of the herd utilizes only the inland ½ of this area. An approximately 200 km long fjord (Nordre Strømfjord) marks the northern border of their range. This fjord cuts all the way from the seacoast to the great inland Greenland Ice Cap. The southern border is marked by the western extent of the long Kangerlussuaq fjord in combination with the relatively small ice cap, Sukkertoppen, which has also been described as a large glacial tongue of the Greenland Ice Cap. The western boundary is the Davis Strait seacoast, while the range's eastern border is the expanse of the Greenland Ice Cap. The region's largest human settlement is Sisimiut, a seacoast city of about 5,000, while a further 200-300 people live in smaller settlements. Greenland's largest International airport (SFJ: Kangerlussuaq / Søndre Strømfjord) is located far inland near the Greenland Ice Cap. Large predators (e.g., wolves, bears, lynx, wolverine) are nonexistent in West Greenland. Roads are typically limited to the settlements, do not link settlements, and do not penetrate the terrain. 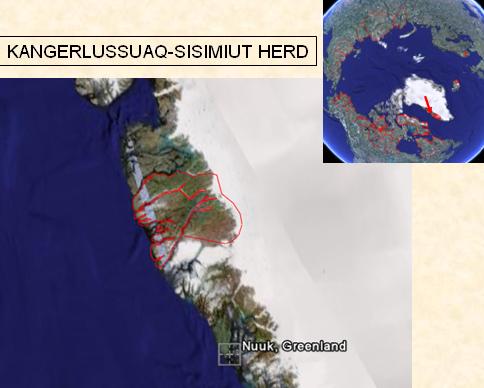 Caribou (Rangifer tarandus groenlandicus) have been native to Kangerlussuaq-Sisimiut for several millennia. Although cows typically possess one or two petite antlers in winter, polled cows are not uncommon. The population is not a cohesive aggregated "herd", but moves about in small groups generally averaging 3-4 caribou. There exists a minimum of synchrony in the timing of migration from winter range to the calving grounds. Annual mass migrations, in which thousands of animals move along together, as observed in North America, does not occur. However, even though separated in time, animals all tend to use the same routes, which are generally in an east-west direction. Total east-west distance travelled by Kangerlussuaq-Sisimiut caribou in their annual migrations commonly does not exceed 60 km. Thus the largest proportion of the herd remains inland year round.

Caribou calving grounds for any herds in Greenland are assumed to be located in close proximity to the Greenland Ice Cap, or at mountainous locations above 300 meters elevation. Few are identified. However, in the 1970's an important calving ground, Isungua, was identified for the Kangerlussuaq-Sisimiut herd. Located immediately northeast of the Kangerlussuaq International airport, the productive Isungua calving ground was disrupted in 2000 by an access road built from the airport to the Ice Cap. The road runs through the middle of Isungua, and since its completion has brought a non-stop stream of people, including hunters, tourists and day-trippers, through the area. Calving cows are now seldom, if ever, observed. These may have moved north to the inaccessible inland area above the Isortoq River. There are no current calving ground surveys estimating early calf survival or birth weights.

Although archaeological records show that caribou have been hunted, specifically in the inland areas, for over 4000 years. Historical journals and harvest records since 1721 suggest that at least 2 abrupt population cycles have occurred. After many decades of scarcity herds appear to increase exponentially, peak, and then seemingly disappear suddenly and remain scarce for the better part of a century before again recovering. Local knowledge and recent harvests suggest that the population has been increasing since the 1960's, has likely been high for several decades, and may already have peaked. Monitoring since 2000 supports this. If the historical cycle repeats itself, then the expected future trend for the Kangerlussuaq-Sisimiut population will be a decline to scarcity. To date, a decrease in numbers has not been observed.

Along with several other herds in West Greenland, the Kangerlussuaq-Sisimiut caribou population was aerially surveyed annually for late winter abundance from 1990 to 1996. However, the results were gross underestimates. This led to the erroneous conclusion that there were too few caribou in West Greenland and hunting was restricted. New helicopter transects surveys for late winter (March) abundance and herd structure were done in 2000 and 2005. Although a 5-fold increase from the earlier surveys, the 2000 estimate of about 51,600 caribou +++ 11,200 (90% CI) was likely also an underestimate owing to survey design and poor observer ability. Five years later with improved survey design and observers, the March 2005 pre-calving population estimate for the Kangerlussuaq-Sisimiut herd was about 90,464 caribou (70,276 - 113,614; 90% CI). Caribou density was 6.2 caribou per km2 in the high-density stratum, and 2.3 per km2 in the low-density stratum. Mean group size was 4.63  3.38 S.D. The March 2005 calf ("short-yearlings" i.e., 10 month old calves) percentage was 11%, and the annual late winter recruitment of "short-yearling" calves was 16 calves per 100 cows.  The bull to cow ratio was 0.33. Owing to the changes in methods the population estimates of the 2000 and 2005 surveys were not comparable. In March 2010 the herd was estimated at 98,300 (71,500 - 132,400; 90% CI) with denisty in prime habitat of about 7 caribou per sq km. 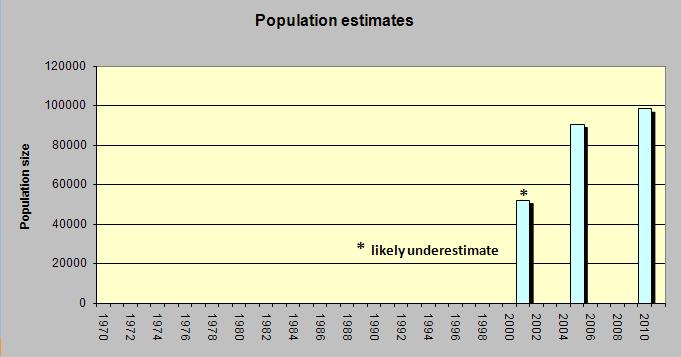 The Greenland Home Rule government is responsible for caribou management, specifically the Styrelsen for Fiskeri, Fangst og Landbrug (Department of Fish, Game and Agriculture) and under that the Styrelsen for Fangst (Division for Hunting). Upon request by this department or division, recommendations based on scientific data are provided by the Greenland Institute for Natural Resources, which is an applied science research institute whose mandate is sustainable use of Greenland's natural resources.

Although given historical cycles a declining trend in caribou abundance may be expected to begin in the foreseeable future, present numbers remain high so harvests are open (no bag limit) and seasons long. The continued high densities of caribou on this range now and for at least the past decade have managers concerned about overgrazing and trampling. To halt further herd growth and perhaps reduce herd size, beginning in 2000 quotas increased dramatically and seasons lengthened. Since 2003 there have been open harvests and the autumn hunting season has typically been 3½ months long. Further, hunting continues through the rut to encourage the removal of cows, and increase the percentage of females in the harvest. Hunters prefer bulls, but these are considered unpalatable during the rut. A winter hunt is permitted for commercial hunters. The harvest strategy is an attempt to reduce density to a target of about 1.2 caribou per km2. All hunters must report the age class (calf, juvenile, adult), sex, location of kill ("X" on a map), rump fat depth, and if the animal was a cow, whether she had a calf-at-heel.

Hunting is prohibited in the near vicinity surrounding the Kangerlussuaq International airport and the road to the Ice Cap. The largely inaccessible Paradise River Valley, which is about 55 kilometres southwest of the airport, is the only other protected area in the range of the Kangerlussuaq-Sisimiut caribou. In Paradise Valley all human activities, not just hunting, are prohibited, i.e., no one is permitted to enter the area.

As in the past, at present there are no management plans or management agreements on the Kangerlussuaq-Sisismiut caribou population.

Ecosystem change: The ca. 35 km access road built in 2000 between the Kangerlussuaq airport and the Ice Cap caused a major habitat alteration for the Kangerlussuaq-Sisimiut herd, because the road traverses what was once sensitive habitat for the herd during the calving and post-calving periods. Since completion, the road has provided year round access to tourists, day-trippers and hunters, who come by bus, car, bicycle or on foot. Placing a barrier bar across the road and applying a hunting ban on a large area about the Kangerlussuaq airport and the road have attempted to address this threat. Experience has shown that the barrier bar is easily circumvented. Further, since there is no hunting officer stationed permanently at the Kangerlussuaq airport, there is limited road patrolling to enforce the hunting restrictions.

Although only in the preliminary stages, a 180-200 km all-season highway / road planned between the seacoast city of Sisimiut and the inland Kangerlussuaq International airport, could pose a major habitat change for the Kangerlussuaq-Sisimiut herd. If built, this would be the first major road in West Greenland. The impacts on caribou range use caused by construction and subsequent human disturbance are unknown. Certainly hunters would have easier access to the herd year round. Also, given the large volume of tourism at Kangerlussuaq and in Sisimiut, non-hunting human use of the region would likely increase significantly. The result may be that portions of the herd's range are lost.

Another potential threat to caribou use and distribution in the region is the proposed construction of an aluminium smelter on the coast of West Greenland, several hydro power plants near the Ice Cap and associated hydro power transmission lines between the two. The Danish National Environmental Research Institute and the Greenland Insitute of Natural Resources have compiled a strategic environmental assessment. Construction is proposed to begin in 2010 and production by 2014. 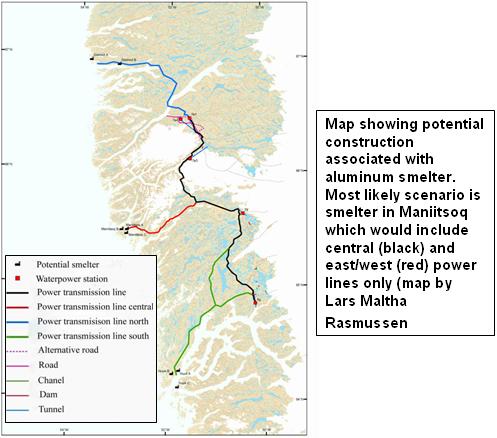 http://www.natur.gl
The Greenland Institute for Natural Resources website. This website is currently (January 2009) under re-construction. Similar to the Greenland government's website, full access is only possible in Danish and Greenlandic. An English version is expected in the future.