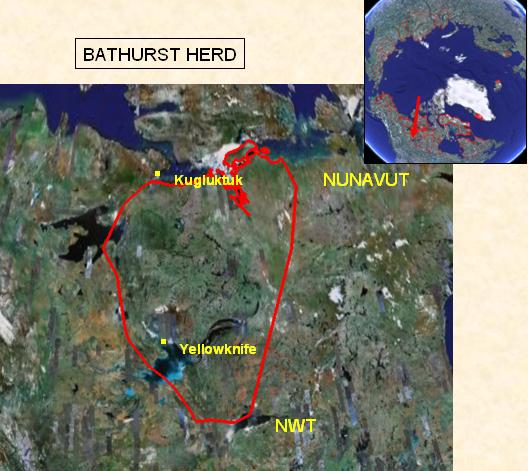 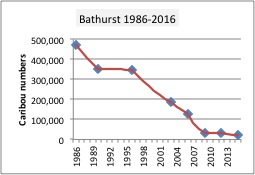 Ecology: The annual ranges of the Bathurst herd are underlain by the Precambrian Shield. The calving grounds have been consistently west of Bathurst Inlet since 1996 (Gunn et al. 2012) but post-calving and summer ranges (based on the movements of satellite-collared cows) have recently contracted further north (Klaczek 2015). Fall range and winter range have shifted onto the tundra with decreasing use of the boreal forests (Dominion Diamonds 2015). Migration distances such as between calving and winter were twice as far in the 1990s as in the 2000s. Habitat trends include a higher incidence of forest fires in the 1990s as well as unusually severe summers such as 2014 when 11% of the preferred winter range was burnt; overall the cumulative loss of winter range to fires is 17% (Dominion Diamonds 2015). On the Bathurst herd summer and fall tundra ranges, mining exploration was high in the early 1990s and since 1998 five diamond mines have been operational (WRRB 2016).

Predation rates are unmeasured: wolf numbers based on use of their dens have declined (Klaczek 2015) but sighting rates of both wolves and grizzly bears during calving ground surveys and wolf sightings during late winter caribou surveys have not declined (WRRB 2016). In the late 1980s, annual harvests for Tlicho people averaged 14,000 caribou but as the herd declined, harvesting declined to about 5,000 caribou by 2010 (WRRB 2016).

Climate: The climate shows an increasing continental influence with warmer summers and colder drier winters. July precipitation is higher than the neighboring herds which reduces the drought index despite the warm July temperatures. However the oestrid index is high. Severe events include high drought indices in 2012 and 2014 and 2014 was also had an exceptionally severe oestrid index. Significant trends are a decrease in the number of days with freezing rain, July precipitation and the mushroom index. Increasing trends are for Rain-On-Snow and warmer temperatures in October.

Management: The mechanisms for the decline appear to be a natural cycle accelerated by high adult mortality from harvesting and predation as the decline progressed. Toward the later stages of the decline in 2012 and 2014, unusually severe summer droughts reduced calf and adult survival. Evidence for natural cycles of 40-60 years duration is from Aboriginal elders oral history correlated with the frequency of hoof scars on exposed spruce tree roots (Zalatan et al. 2006).

The herd’s annual range is within the jurisdiction of the Governments of Nunavut and Northwest Territories and three co-management boards. The Wek’èezhìı Renewable Resources Board, Sahtu Renewable Resources Board, and Nunavut Wildlife Management Board have held public hearings to develop management actions. Although the decline was recognized in 2003, sequential restrictions did not start until 2007 with reduced commercial harvesting. In 2010, all commercial and resident harvesting was halted and subsistence harvesting was restricted to 300 caribou. As the herd decline accelerated, subsistence harvests were halted in 2016 (WRRB 2016). In 2010, attention also focused on wolf management and incentives for wolf harvesting were increased but did not appear effective (WRRB 2016).

WRRB 2016 – the public registry of the Wek’èezhìı Renewable Resources Board includes reports and papers on the Bathurst herd http://www.wrrb.ca/public-information/public-registry

Boulanger, J., A. Gunn, J. Adamczewski, and B. Croft. 2011. A data-driven demographic model to explore the decline of Bathurst caribou herd. Journal of Wildlife Management 75:883-896.

Gunn, A., K.G. Poole, and J.S. Nishi. 2012. A conceptual model for migratory tundra caribou to explain and predict why shifts in spatial fidelity of breeding cows to their calving grounds are infrequent. Rangifer Special Issue No. 20:259–267.