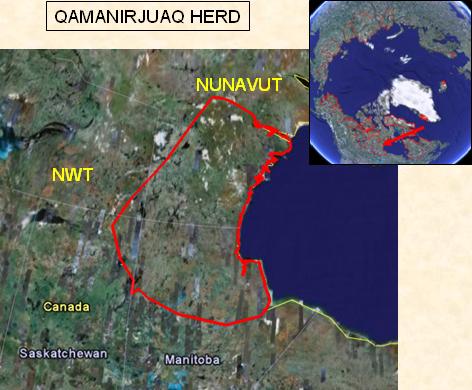 Ecology: The calving ground is along the west coast of Hudson Bay and has been relatively consistent in location since the 1960s (Gunn et al.  2007). The post-calving to fall ranges are on the low-lying coastal tundra and by the rut, caribou are migrating toward the tree line and into the boreal forests of northern Manitoba, Saskatchewan and the NWT (NPC 2016). Mineral exploration on the inland calving ground increased 2005-09 (BQCMB 2014) while on the herd’s summer range, an open pit gold mine started construction connected by an all-season road to Rankin Inlet. Winter habitat, especially in NWT and Saskatchewan is lost to forest fires but trends are unmeasured.

Sighting rates of wolves are more frequently recorded than grizzly bears on the calving grounds and were high compared to other herds (Poole et al.  2007). Increases in wolves have been reported (BQCMB 2016a).

Climate: The herd’s calving and summer range is relatively far south (latitude 62o 30’N) compared to the western herds which contributes to relatively warmer spring and summers. Falls are milder and Rain-On-Snow is more frequent during winter. Snow depths in early June are exceptionally low compared to other herds and have high annual variability and the plant Growing Degree Days is high in July. The two significant trends are warmer Octobers and increase in the July drought index. The annual number of days with mean >25oC averaged 2.8 ± 0.47 (SE) days for 1979-2014 which is high compared to, for example the Bathurst herd. Extremes include 10 days >25oC  in 2014 (CARMA unpubl. data) and extremes in the drought index were recorded in 2004, 2009 and 2011.

Monitoring: The estimates of herd numbers are based on photographic strip transects to estimate caribou numbers on the calving grounds extrapolated to numbers of breeding cows based on sex and age composition survey.  Trends in adult survival are available for 1993-2003, when the rate for the satellite-collared cows was 0.79±0.043 SE when abundance was starting to decline (Boulanger et al. 2003).  Spring calf to cow ratios are monitored (1994 - 2010) and since 2000, the ratio for calves:100 cows is less than 35:100 which is likely consistent with a declining herd (Campbell et al.  2015).

Harvest rates were annually reported to the Beverly-Qamanirjuaq Caribou Management Board (BQCMB 2014), but after 2009, harvest information was not reported as the data were becoming less and less available. The estimated annual harvest of Qamanirjuaq caribou was 8,000 to 10,300 (2004-2009).  The herd has been harvested by people from at least 14 communities from and based on replacement meat costs is annually valued $15m (BQCMB 2016a).

Management: Reasons for the herd’s decline of almost 50% since 1994 are not well-understood. Apart from lack of harvest information, a current issue is meat sales over the Internet which have increased since 2010.  The annual range is within two provinces (SK, MB) and two territories (NU, NT). The Beverly Qamanirjuaq Caribou Management Board was established in 1982 to advise to governments and communities on conservation and management for the two herds. The BQCMB published a 3rd revision of its 1987 management plan (BQCMB 2014) while both territorial governments have territory-wide caribou management strategies.

Uncertainty about the decline and the unknown harvest levels led the BQCMB (2016b) to rate the Qamanirjuaq herd’s vulnerability as “medium-high” which has a sustainable harvest level of 2-3%. The role of predation, forage availability, climate, diseases or parasites is uncertain. Proposed management actions in 2016 are education and sharing information; building partnerships and promoting voluntary bull harvests. The Nunavut Planning Commission is (2016) drafting land use planning which includes zoning and proposed mitigation for caribou seasonal ranges.

Boulanger, J., and A. Gunn. 2007. Exploring possible mechanisms for the decline of the Bathurst herd of barren-ground caribou using demographic modeling. Department of Environment and Natural Resources, Government of the Northwest Territories. Manuscript Report No. 175. 56pp.

Poole, K.G,. A. Gunn, and J. Wierzchowski. 2013. An operations guide to barren-ground caribou calving ground density, dispersion and distribution surveys, based on an assessment of the June 2007 and 2008 Surveys, Northwest Territories and Nunavut. Department of Environment and Natural Resources, Government of the Northwest Territories. Yellowknife, NWT. Manuscript Report No. 226. 89 pp.