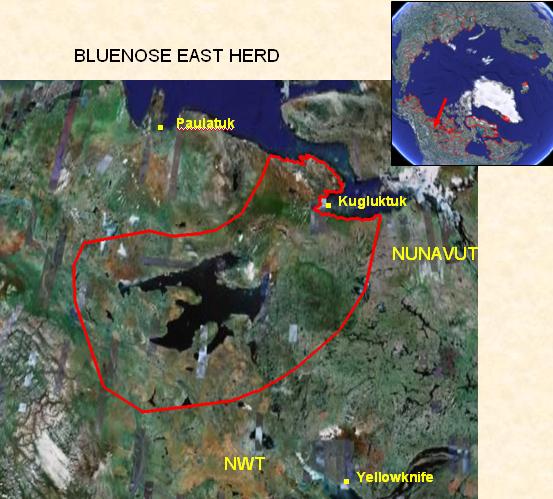 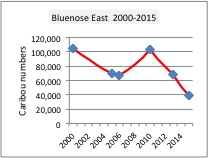 Ecology: The Bluenose East herd has a higher percentage of its annual range (79%) within the boreal forest than neighbouring herds. The calving and summer ranges are on the tundra and mostly underlain by the Precambrian Shield which influences topography, drainage and vegetation. Trends in winter range overlap with neighbouring herds are unreported but are extensive in some years. Wolf and grizzly bear sighting rates on the calving grounds were annually variable for wolves and an increasing trend in bear sightings from 2010 to 2015 reaching 6 wolves and 8 bears/10 flying hours in 2015. Wolf sightings on late winter ranges were recorded from 2009-2015 and averaged twice as high (22 ± 2.7 SE wolves/10 hours) as recorded for the Bathurst herd (WRRB 2016).

The Bluenose East herd is primarily harvested by Sahtú Dene and Metis, Inuit, Tlicho and Deh Cho in nine communities; Behchoko, Deline, Gameti, Kugluktuk, Norman Wells, Paulatuk, Tulìt’a, Whatì, and Wrigley. Annual harvests between 2009 and 2013 averaged 2,700 caribou, which may be an under-estimate, and were mostly cows (WRRB 2016).

While there is concern about the effects of industrial exploration and development, no operational mines occur within the herd’s range and exploration has been relatively infrequent.

Climate: The climate is similar to the Bluenose West and Cape Bathurst with colder and drier winters but relatively warmer calving and summers due to an increasing continental effect. Warmer and drier summers increase both the drought and the oestrid index. Significant trends (1979-2016) include fewer days with freezing rain, lower snow depth in May and June, increases in June plant Growing Degree Days, the drought and oestrid index and a warmer fall temperatures.The drought index peaked during the late 1990s and then again in 2012 and 2014 when the index was twice the average.

Management: Mechanisms for the decline are uncertain but the warm summers of 2012 and 2014 with severe drought conditions and the high rate of harvest may have combined with predation to accelerate a decline. The herd’s annual range is within the jurisdiction of Wek’èezhìı Renewable Resources Board, Sahtu Renewable Resources Board, Inuvialuit Game Council, Nunavut Wildlife Management Board, and the Governments of Nunavut and Northwest Territories. Coordination and information sharing about the herd is through the Advisory Committee for the Cooperation on Wildlife Management which is finalizing management actions and planning for the Cape Bathurst, Bluenose West and as well as the Bluenose East herds.

Adamczewski, J., J. Boulanger, B. Croft, T. Davison, H. Sayine-Crawford, and B. Tracz. 2013. A comparison of calving and post-calving photo-surveys for the Bluenose-East herd of barren-ground caribou in the Northwest Territories, Canada in 2010. Department of Environment and Natural Resources, Manuscript Report No. 245, 62 pp.