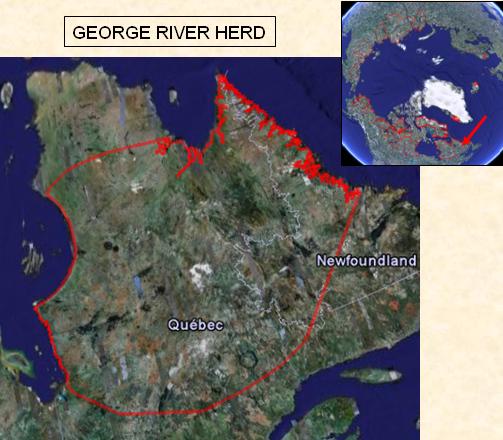 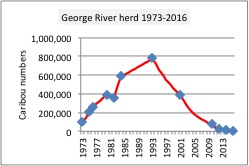 Ecology: Most (89%) of the annual range is below the tree line in the forest tundra zone and the summer range is relatively far south. As numbers declined, the calving ground shifted toward eastern Labrador and the winter range contracted 78% and shifted from Ungava Peninsula and the coast of Hudson and James Bay shifted east to the Labrador coast. The shift in distribution led to more accessibility to the winter ranges. Roads such as the Trans-Labrador road link Schefferville to Churchill Falls and to Goose Bay. The Voisey Bay nickel mine on the Labrador coast started operation in 2005 and hydro-electricity projects have also increased and mining exploration is increasing with 12 exploration projects in 2015 in Labrador.

As well as the parasites typical for other caribou herds, George River caribou have higher Besnoitia tarandi prevalence and are infected with the giant liver fluke. Intensity of infection is higher during spring migration and during and after the peak caribou numbers. Less is known about the effects of wolf and black bear predation on caribou especially as range sizes have contracted which affects the functional responses of the wolves.

Climate: The climate is relatively moist with high summer rainfall and winters characterized by greater snow depths days with freezing rain and exceptionally high Rain-On-Snow.  March and early June snow is relatively deep and plant Growing Degree Days are low in June and July. The cooler wetter summers reduce the drought and oestrid indices. Octobers are warm with mean monthly temperature only a few degrees below freezing and significantly increasing since 1979. Other significant trends are less Rain-On-Snow and days with freezing rain and warmer, wetter Julys with increases in the oestrid index.

Body condition and reproductive performance have been extensively monitored during the herd’s increase, peak and decline in abundance (Bergerud et al. 2008, Couturier et al. 2009, Pachkowski et al. 2013).  Calf birth weight averages 6.1 kg 2007 – 2011 and fall weaning weight has increased for the same period which together with increasing adult female body mass (1985 to 2009) suggests summer range is not limiting. But pregnancy rates are low at 75-77% for 1989 – 2012.

Harvests are monitoring for the resident and sports hunting in both Quebec and Labrador. In, for example, 2007/08 the combined harvest for Quebec for resident and non-resident hunting was about 5300 caribou and uncertainty remains about the aboriginal harvest.

Management: The changing body condition and reproduction suggested reduced forage started the decline in the late 1980s and early 1990s, as the herd declined; harvest rates became the accelerating factor. Uncertainties remain as the numbers are so reduced and for example, the sex age structure is distorted.

The Ministère des Forêts, de la Faune et des Parcs du Quebec and the Wildlife Division of the Government of Newfoundland and Labrador collaborate for monitoring and management. In Quebec, the Hunting Fishing and Trapping Coordinating Committee is responsible of addressing co-management issues. The HFTCC organized a caribou workshop in Montréal in January 2010 and in 2012 in collaboration with the Torngat Wildlife and Plants Co-Management Board and the Nunatsiavut Government, the HFTCC. Also in 2012, the Aboriginal Governments formed the Ungava Peninsula Caribou Aboriginal Round Table (UPCART) which includes Innu, Inuit, Métis, Cree and Naskapi from the two provinces. UPCART is developing a management strategy to work with the provincial government’s updated 2004-2010 management plan (Jean  and Lamontagne 2004).

Management actions took the form of harvest restrictions: in 2009, commercial caribou licenses in Labrador were reduced by 60% and then in 2011, the resident quotas were reduced from 2 to 1 caribou per license with no transfers to another hunter and the season was reduced from 8 to 3 month season.  In  2012, Quebec closed the sport hunt. In 2013, the Newfoundland and Labrador government has announced a 5-year ban on hunting caribou with a review after 2 years while, the Inuit government in Nunatsiavut and the Inuit-Metis group NunatuKavut have asked their members to abstain from hunting the George River herd for a two-year period.