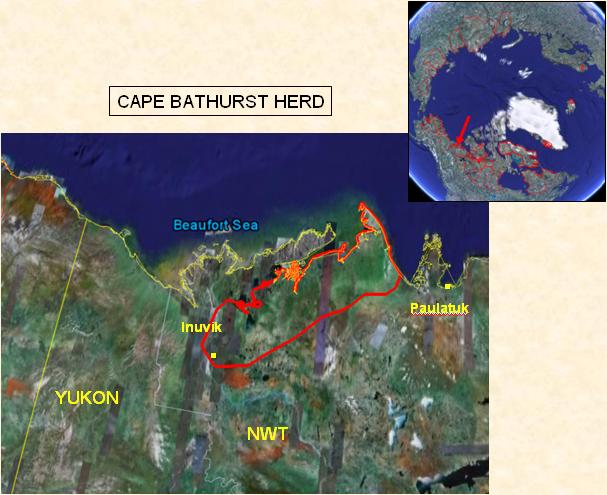 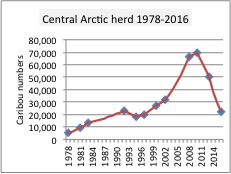 Ecology: Historic survey data of the 'Bluenose' herd indicated three separate calving areas. Genetic analysis and satellite collaring confirmed three herds with separate calving grounds and post-calving grounds - the Cape Bathurst, Bluenose-West and Bluenose-East herds. The Cape Bathurst herd calves and summers on the Cape Bathurst peninsula and winters below the treeline west toward Inuvik. The herd is primarily harvested by Inuvialuit and Gwich’in from Aklavik, Inuvik, Tsiigehtchic and Tuktoyaktuk. Forest fires are relatively rare on the winter range (Davison 2014).

A cumulative effects analysis reported that 64% of caribou harvesting areas had environmental disturbance which were mostly thaw slumps or seismic lines (Tyson et al.  2016). Additional to  concerns about oil and gas exploration in the herd’s winter range are potential effects of a 140 km all-weather road connecting Tuktoyaktuk to Inuvik crosses the wintering range of the Cape Bathurst herd. The road has raised concerns about cumulative effects and possible changes in harvesting (EIRB 2013).

Climate: The calving and summer range on the peninsula surrounded by sea-ice is relatively cool compared to more eastern herds and plant Growing Degree Days and the oestrid index are low. Summer precipitation is exceptionally low which elevates the drought index (extremes indices were in the late 1980s, 1990s and 2010 and 2012). Other severe and infrequent events are fall icing which in 2003 triggered unusual movements along the coast (Davison 2014). Significant trends (1989-2016) include reduced snow depths in early May, more plant Growing Degree Days in June, a declining mushroom index and warmer temperatures in October.

Management: The mechanisms for the decline are uncertain especially given the lack of demographic information but the decline was possibly accelerated by interaction among harvesting, predation and climate. The herd’s annual range is within the jurisdiction of the Gwich'in Renewable Resource Board and the Inuvialuit Wildlife Management Advisory Council as well as the Government of the Northwest Territories. Non-aboriginal harvest limits were implemented in 2006, and then in 2007 the harvest was closed (Davison 2014).