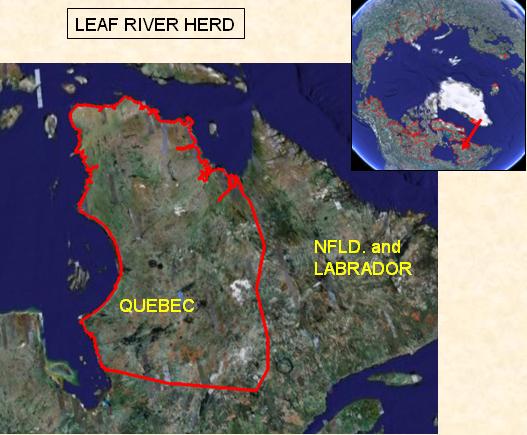 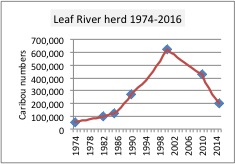 Ecology: The Leaf River herd’s calving, summer and fall ranges are on the tundra and are relatively far south being below 60oN latitude. Directional shifts in the calving grounds are extensive since 1975 although annual overlap is relatively high (Taillion et al.  2012). During fall migration, the caribou move south to the tundra-forest zone which is especially extensive on the Ungava Peninsula (Payette et al.  2001). Winter range has expanded since 2001 (Taillion et al.  2016) and extends south deeper into the lichen woodland. The winter distribution is concentrated north of the La Grande hydro project whose dams and generating stations are connected by the all-weather 666 km road. Caribou strongly avoid the vicinity of the road as most of the winter sport hunt is close to the road (Plante et al.  2016). The road links with the 800 km James Bay road to the Cree communities and southern Quebec. South of La Grande is the Eastmain hydro project and a recently constructed gold mine. The Raglan mine is on the eastern post-calving ranges and the mine became operational in 1997. The nickel ore from the underground mining and open pits is milled and trucked 100 km to the coast for year-round shipping. There is mine exploration along the east coast of Ungava Peninsula with a proposed iron ore mine near the community of Aupaluk.

Trends for predators include increases in sightings of black bears on the tundra and of wolves since 2010 (Taillon et al.  2016). While the Leaf River herd has parasites typical of other migratory tundra caribou herds, it also has a high prevalence of the parasite Besnoitia tarandi which may be transmitted by biting flies (Simard 2015). Prevalence was 50% in 2011 before declining to <20% in 2014 (Taillon 2016).The Leaf River caribou are also infected with giant liver flukes (Fascioloides magna).

Leaf River caribou are harvested by people from nine Cree communities (17,500 people) and 10 Inuit communities (10,000 people). Quebec issues hunting licenses for sport-hunting which is regulated by zone, level and season.

Climate: The winter range is warmer than western herds with a higher frequency of Rain-On-Snow and days with freezing rain. Snow depths are greater in March and deeper snow persists into early June and plants Growing Degree Days are low in June and July. Summers are cooler and moist so the drought and oestrid indices are exceptionally low.  Significant trends include a less Rain-On-Snow and fewer days with freezing rain while July is warmer with more Growing Degree Days and a higher oestrid index. Other climate trends include a shorter duration of snow cover and earlier flowering and leaf expansion in dwarf birch (Betula glandulosa). Warmer summers have led to an increase in shrubs on the tundra although caribou browsing modifies the effect (Cote et al.  2014).

Monitoring: Herd size has been estimated seven times since 1975: methods switched in 2001 from calving to photography of post-calving aggregation and in 2011, both pre and post calving aggregations were photographed (Taillon et al.  2016). Natural mortality and fall recruitment have been monitored since 1994 and parasites, body condition and pregnancy rates have been monitored through the Quebec government and research by the University of Laval’s Caribou Ungava group.

The mechanisms for the decline and its acceleration between 2011 and 2015 are likely a natural cycle and a once a decline was underway, harvesting became less sustainable although the role of climate and predation are unclear. Historically, based on tree chronology and caribou hoof scar frequency, caribou abundance was high in the late 1700s– early 1800s and the late 1900s, and a period of moderate caribou activity in the late 1800s – early 1900s (Payette et al.  2004).

The Québec government cooperated with the Hunting, Fishing and Trap­ping Coordinating Committee (HFTCC), to write a 2010 management plan (Jean and Lamontagne (2010) and hold major workshops in 2010 and 2012 with stakeholders (JBHTHCC 2016). Management activities include

harvest reductions in fall 2011 and a shorter winter hunting season.