There are three herds recognized in Yakutia; the Lena-Olenyk, the Yana-Indigurka and the Sundrun.  In the 17th century, 700 000-900 000 wild reindeer were presumed to populate Yakutia. From 1920 through 1930 their numbers were been drastically reduced due to uncontrolled hunting and the expansion of the domestic reindeer herding industry. The mainland tundra populations started to increase from 1950 through 1960. By 1963-1965 the number in the three herds was 80 000 animals increasing to 230,000 to 240,000 by the late 1980s. This increase was maintained by high reproductive rates, favourable sex ratios and low hunting. The stability of the Lena-Olenyk herd may be explained by reindeer recruitment from the neighboring Taimyr herd. These two herds are known as genetically close and once in the past were a single unit. The other positive reasons for this population to be stable are a relatively light hunting pressure and relatively low proportion of adult females in the harvest. 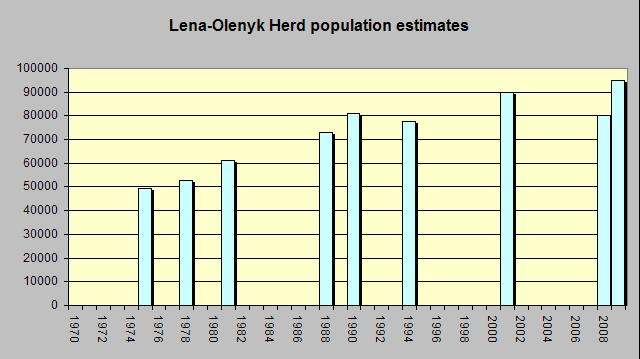