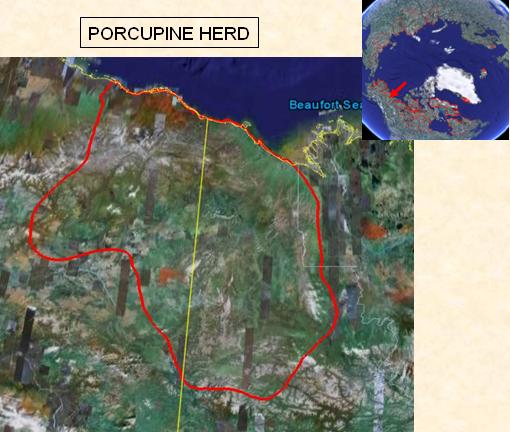 The herd is intensively monitored with locations of calving grounds identified every year since the early 1970's, early calf survival every year since 1983, and comparable population estimates since 1976. The Porcupine Herd reached a peak in 1989 (178,000) and, then declined until the 2001 census (123,000) at a rate of 3.5% per year based on censuses in 1992, 1994, 1998 and 2001. Early movement of the herd from the Alaskan coastal plain and bad weather during late June and early July has prevented a population estimate after 2001. A successful population estimate was finally completed in 2010 indicating that the herd had increased to 169,000 animals. In 2013 estimate indicated that the continued to increase to 197,000, representing an average annual growth rate of 5% from 2010 through 2013. Of all herds in North America which increased in the latter quarter of the 20th Century, the Porcupine Herd had the lowest rate of increase, however with increasing numbers since 2001 the herd presently is the only major North American herd that is on the increase.

The Porcupine herd winters in the Ogilvie and Richardson Mountains and Eagle plains region of central Yukon and in the southern Books range of northcentral Alaska (Russell et al 1993). The progress of spring migration is related to the timing of snowmelt and cows can be delayed even up to the calving period (e.g. 2000 and 2001; Griffith et al 2002). In those years of late snowmelt a large number of calves did not survive the first month of life. Calving usually peaks in early June. Calving grounds are located on in the foothills and coastal plain of Alaska and northwest Yukon (Griffith et al 2002) with animals tracking early green vegetation to support the high costs of lactation. In summer the herd spreads out further onto the coastal plan and east through Ivvavik national Park in Yukon to the Richardson Mountains. Fall migration is usually spurred on by snow storms.

The herd is intensively monitored with locations of calving grounds identified every year since the early 1970's, early calf survival every year since 1983, and comparable population estimates since 1976. (ADF&G 2015). Individuals have been tracked via radio-collars on the herd since 1978.

The Porcupine Herd usually calves on the Arctic coastal plains but summers more inland in the Foothills and winters in mountainous basins. This elevation variability contributes to a climate which differs from the neighboring herds in cooler and moister summers with a low drought index. Snow depths are greater. Current trends (since 2000) indicate a higher late spring and summer growing degree days. As well since 1979 summer precipitation, has increased, summer drought decreased and fall temperatures increased.

The Porcupine Caribou Management Board:
http://www.pcmb.ca

The North Yukon Land Use Plan