Voices of the Caribou People

Voices of the Caribou People is a video-based project to document the knowledge of Indigenous People who traditionally have a close relationship with caribou (called wild reindeer in Russia). The project is being carried out in partnership with Indigenous Peoples of North America who subsist on caribou and identify themselves as "caribou people". Following are the main objectives of Voices project:

-With other northern communities
-With researchers
-With greater public

The fieldwork was conducted to record people's observations of changes that are taking place on their homelands and life style, and how these changes are affecting their traditional culture. Elders, hunters, leaders, and youth were interviewed in each participating community.
Voices project brings indigenous perspectives about human-caribou relations to complement on-going ecological and biological research on caribou during the International Polar Year period (2007-2009). It is a work-in-progress. The video material will be used in three ways:

Voices project work was conducted in partnership with the participating communtities. Interviews were conducted along four main themes:

In the summer of 2008, field work and video-documentation was carried out in following communities across North America: 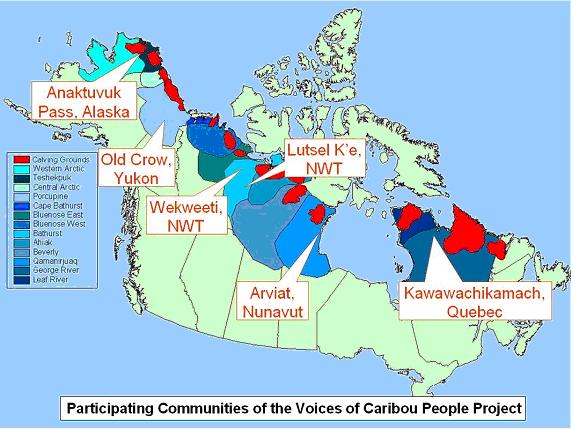 Elders, active hunters, community leaders, women and youth were interviewed in each participating community. Total 97 interviews were conducted, in which the community residents talked about their way of life in wake of a rapidly changing world, noted observations about perceived changes about caribou as well as caribou hunting and uses, and expressed concerns regarding their future. In most cases, participants expressed satisfaction in not being treated as subjects of research but rather as having their voices presented without modification or a third-party critique.  Strong local leadership was a key condition for successfully engaging communities in the project.  The voices of caribou people illustrate that communities share many similarities and some differences in the challenges they face.  These challenges include the ubiquitous problem of increased energy costs, greater extractive development activities in homelands, and some problems of engaging youth in traditional pursuits.  A willingness to engage fully in extractive development activities appears associated with a long history of development activities in the region.  The Voices of Caribou People Project is in progress and its impact is not yet evaluated.

The project hopes to provide an opportunity for caribou people to share their coping strategies with other indigenous communities, give insight to CARMA researchers on local people's needs of northern science, and communicate the important issues concerning human-caribou systems to the greater world.

The communities see the videos as a useful tool for following reasons:

The Voices of Caribou home page can be found here: