This analysis will assess the use of winter range by the WACH, identify potential winter range, contrast burned and unburned habitat, summarize the fire regime within the herd's range, model the impacts of warming and fire management on extent of winter range, and develop management recommendations based on these findings.

Habitat use will be assessed by comparing locations recorded by satellite telemetry collars to available habitat mapping products.  Differences between used and random locations, burned and unburned locations, and current, historic and potential winter range will be assessed using vegetative data collected from field studies. 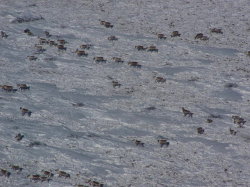 The regional fire regime will be summarized by reviewing existing literature and analyzing AFS' large fire database. Summary weather data will be compared to fire extent to reveal potential correlations.  Modeling efforts, using various potential warming scenarios and fire management options, will be undertaken to understand how the extent and quality of winter range may change over time.  Vegetation data from the field studies and fire regime data summary analysis will be employed to improve these modeling efforts.  The analyses and findings will be synthesized to develop management recommendations for caribou and fire management in the region.

The results will be used to guide the management of the Western Arctic Caribou Herd and also to develop a Fire Management Plan for Northwest Alaska.